The Regulation on the Amendment of the Regulation on the Evaluation and Management of Ambient Noise entered into force by being published in the Official Gazette dated 7 January 2022 and numbered 31712. The regulation brought important provisions on entertainment venues and outdoor activities within the scope of noise pollution.

What does the Regulation say?

The Regulation on the Evaluation and Management of Ambient Noise (“Regulation“), defines four main types of areas that are named “very sensitive,” “sensitive,” “less sensitive,” and “not sensitive” and it is obligatory for businesses and facilities operating near, adjacent to, below or above these areas to comply with the noise standards stipulated for these areas. The rules to be complied with in accordance with the new provisions are explained in the table below in comparison with the provisions before the amendment: 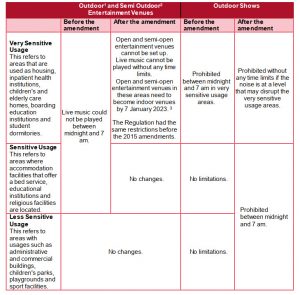 In addition to the amendments provided in the table above, the provision that empowers the inspecting personnel or unit to decide which sanction (such as time limitations or closure) will be applied in cases where violations are detected has also been repealed by this amendment.

The amendment of the Regulation likely aims to differentiate environmental noise limitations between very sensitive and sensitive areas of use. However, it is important to note the issues on enforcement of the previous regulations (can be found here in Turkish) and the judicial decision that ruled the annulment of these regulations.[4] In light of past experience, how the new Regulation will have an impact in practice will be important in the future for stakeholders.